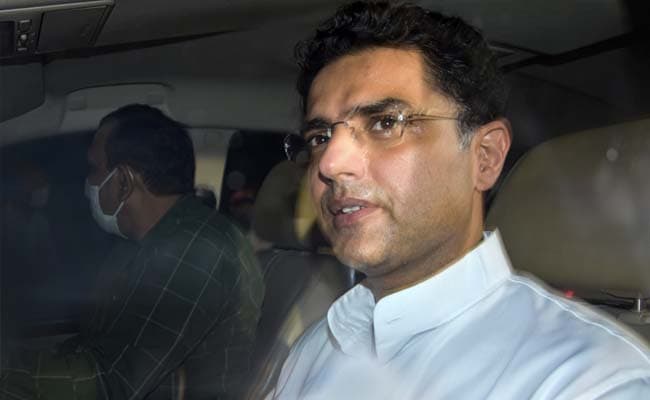 Sachin Pilot, who dropped his rebellion after a meeting on Monday with Rahul Gandhi and Priyanka Gandhi Vadra, returns to Rajathan today, a month after he broke ranks with Chief Minister Ashok Gehlot. He is expected to arrive in state capital Jaipur in the afternoon.

Sachin Pilot’s return to the fold was enabled by the Gandhis agreeing to address his grievances, chief among them being Ashok Gehlot’s style of functioning. Acting unusually quickly, the Congress announced a panel of three including Priyanka Gandhi and it met with 19 rebel MLAs the same evening to hear their complaints.

Sources say Chief Minister Gehlot, who, unlike the party’s measured criticism, had gone all out against his sacked deputy, is upset about the truce that allows Mr Pilot a homecoming without any major consequences.

The Chief Minister has left for Jailsalmer, where he has sequestered Congress MLAs in anticipation of a test of strength in the special assembly session on Friday. The MLAs are feeling “let down and disillusioned”, say sources, and senior Congress leaders have been trying to calm them down.

On Sunday night, the MLAs said at a meeting that the rebels should be punished for their “betrayal” and should not be allowed back.

Sources say Mr Gehlot will go with three of his ministers and hold a meeting at hotel Suryagarh, where the Congress MLAs have been staying after moving out of the Jaipur resort they had been staying in since early July. Several meetings will held till late last night.

The Chief Minister is expected to try and pacify his upset loyalists just two days after he gave them a pep-talk, urging them to be united in order to win a trust vote.

Congress sources say when he learnt of the reconciliation moves, Mr Gehlot approached the party leadership. But he was reportedly advised to fall in line, given the Gandhis’ keenness to keep Mr Pilot in the party and prevent a repeat of its disaster in Madhya Pradesh, where Jyotiraditya Scindia’s exit brought down the Congress government.

It is not clear whether Mr Pilot will, however retain the two posts that Mr Gehlot had sacked him from – Deputy Chief Minister and Rajasthan Congress chief.

Mr Pilot, during his conciliatory meeting with the Gandhis, also retreated on his key demand – the removal of Mr Gehlot as Chief Minister.

He told reporters on Monday evening that his rebellion was about “ideological issues”.

“There were some issues which we wanted to highlight. I did that. I had been saying since the beginning that all these things were based on principle. I always thought it was essential to raise these things in the party’s interest,” he added.

Later, in a late-night tweet, Mr Pilot thanked Gandhis and other senior leaders for “addressing grievances”.

“I thank Smt Sonia Ji, @RahulGandhi Ji, @priyankagandhi Ji & @INCIndia leaders for noting & addressing our grievances.I stand firm in my belief & will continue working for a better India, to deliver on promises made to the people of Rajasthan and protect democratic values we cherish,” he tweeted.

It will be difficult for Mr Gehlot and Mr Pilot to put the episode behind them and work together again.

In the past month, Mr Gehlot has openly attacked Mr Pilot, accusing him of deal-making with the BJP to pull down his government. He also labelled the 42-year-old leader as “nikamma” (useless) and derided him as a politician who influenced the media with only looks and good English.

‘Signs of life'(after Thermal Scanning) Under Beirut Rubble one Month after...

Amid Pandemic, This Is What PM’s Independence Day Schedule Looks Like

Fall Guys: Other Companies Really Want Their Own Crossover Skins