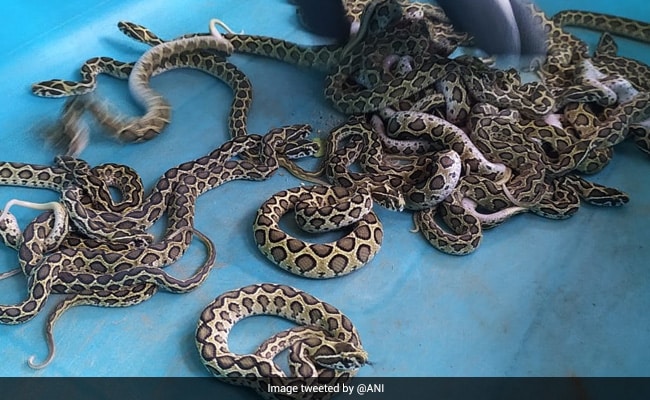 A Russell’s Viper gave birth to 33 snakelets at the Coimbatore Zoo.

What makes Russell’s Viper different from other snakes is that they can give birth to up to 60 snakelets.

“Recently in our zoo, one of Russell”s viper snake gave birth to 33 snakelets. The specialty of this snake is that it can give birth to 40-60 snakes. All the young ones are in a healthy state but we would not be maintaining all of them,” Senthil Nathan, Zoo director told ANI.

He added that the snakes would be handed over to the forest department. “We would hand over all the young ones to the forest officials. But not all of them would be able to survive in the forest because of the predators,” he said.

Tamil Nadu: Russell’s Viper gives birth to 33 snakelets at VOC Park Zoo in Coimbatore. The snakelets will be let into Anaikatti forest. pic.twitter.com/DJ2Rx8yV4z

Nathan further said that a few years ago, another snake had given birth to sixty babies.

Earlier in June, Russell’s viper was rescued by a private snake catcher from a house in the outskirts of Coimbatore.

A man residing on the outskirts of Coimbatore went into a deep shock on Friday when he noticed a big snake in his bathroom. Later, the Kovil Medu resident sought the help of a private snake catcher team which identified the snake as Russell”s viper, one of the most venomous snakes.

During the rescue operation, the snake gave birth to 35 snakelets. The snake was released into Anaikatti forest Range in the evening.

Post Rajinikanth, Akshay Kumar is all set for ‘Into The Wild...

Video Of This Elusive Nilgiri Marten Is Viral

India Logs More Cases In 24 Hours Than US, Brazil For...

WhatsApp Will Soon Let You Use Your Account on Multiple Devices