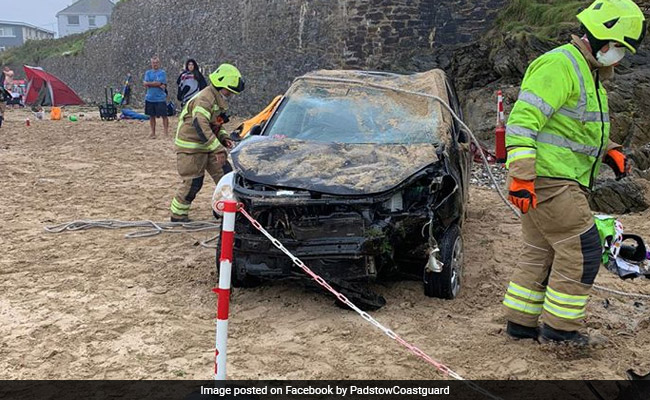 The car plunged down a 20-foot cliff and landed on a tent.

A group of holidaymakers in the UK had a lucky escape after a car plunged 20-feet down a cliff and landed on a tent they had exited just minutes before. The incident occurred when the driver failed to take a corner and lost control of his vehicle, plummeting down the cliff and landing on Mawgan Port beach, near Newquay in Cornwall, on August 6, reports the Daily Mail.

The car landed upside down on the tent, as photos shared on Facebook by Padstow Coastguard show. Luckily, the inhabitants of the tent had left to paddle in the sea and were not injured in the incident.

Even more luckily, the driver of the car, who has not been named, also escaped with only minor injuries. He was taken to Treliske Hospital as a precaution, suffering only minor cuts and bruises.

“Padstow Coastguard requested to assist Newquay Coastguard, alongside South Western Ambulance NHS Service Trust, Cornwall Fire & Rescue Service & Devon & Cornwall Police, with a car that had landed on the beach,” the team wrote on Facebook, sharing chilling pics. “With no other casualties other than minor injuries on the driver only, Padstow team were then stood down.”

The photos have gone viral on social media, collecting a number of stunned comments.

“Thank goodness nobody was hurt , the driver was obviously driving too fast,” wrote one Facebook user.

“Someone was definitely looking out for the driver and the people whose tent it was,” another remarked.

According to Cornwall Live, the driver has been reported “for driving without due care and attention.”

Why NASA Picked Jezero Crater for the Perseverance Rover