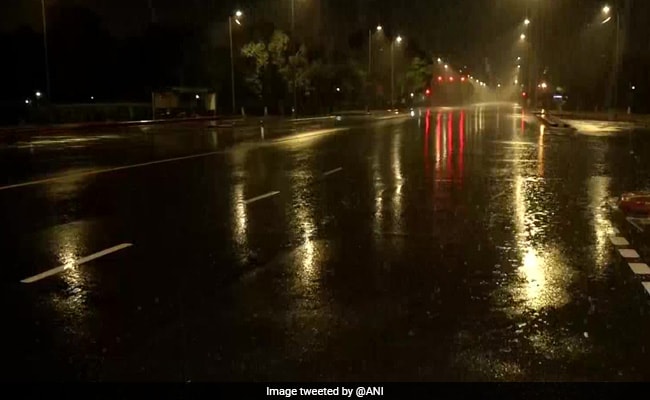 IMD predicted moderate to heavy rains in the national capital till Wednesday.

A fresh spell of rains on Sunday brought some relief to people living in Delhi from the sultry weather conditions prevailing in the city.

The India Meteorological Department (IMD) said light to moderate rains were reported from many places, including IGI airport, Dwarka, Safdarjung, and Bahadurgarh.

It predicted moderate to heavy rains in the national capital till Wednesday.

Kuldeep Srivastava, the head of the IMD’s regional forecasting center, said the monsoon trough is likely to shift northward and will stay close to Delhi-NCR from Sunday to Wednesday.

“During this period, southwesterly winds from the Arabian Sea and easterly winds from the Bay of Bengal will reach Haryana, Delhi-NCR and west Uttar Pradesh in lower levels. A cyclonic circulation will also develop over Madhya Pradesh and adjoining UP at the same time,” he said.

“As a result, moderate rain, including one or two spells of intense rains, will occur over Delhi,” Srivastava said.

Fairly widespread rainfall will occur over northwest India, except for west Rajasthan, the IMD said.

After above normal rainfall in July, monsoonal precipitation has remained subdued in Delhi in August so far.

The Safdarjung Observatory, which provides representative figures for the city, has recorded just 20.9 mm rainfall in August so far, against the normal of 83.7 mm, a deficiency of 75 per cent.

The Palam and the Lodhi Road weather stations have recorded 40 per cent and 76 per cent less rains this month.

In Bengaluru, 200 Babies Born To Covid Positive Women, All Test...

My Name Is Karen. What Can I Do About the Meme?