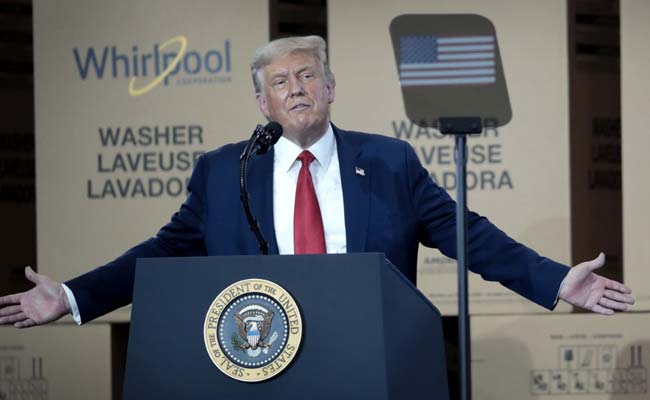 Donald Trump speaks to workers at a Whirlpool manufacturing facility in Clyde, Ohio.

China’s entry into the World Trade Organisation is the “worst of all deals” said US President Donald Trump on Thursday.

“China’s entry into the World Trade Organisation which is probably the worst of all the deals, if you want to know the truth…They violated the rules like nobody had ever violated it before,” Trump said at the Whirlpool Corporation Manufacturing Plant in Ohio.

“In the past, politicians have aggressively pursued a policy of globalisation, moving our jobs, wealth, and our factories overseas.

Globalisation has made the elites who donate to politicians wealthy and has left nothing for our workers expect for poverty and heartache,” he added.

Further calling China a developing nation, the US President said that they had advantages “but we did not accept them”.

Previously in January, Trump said that the US has not been “treated fairly” by the World Trade Organisation (WTO), which considered China and India as developing nations.

“The World Trade Organisation has been very unfair to the United States for many, many years. And without it, China wouldn’t be China, and China wouldn’t be where they are right now. I mean, China — that was the vehicle that they used. And I give them great credit. And I also don’t give the people that were in my position great credit, because, frankly, they let that all happen. But the vehicle was the World Trade Organization,” Trump said.

The Trump administration has been for long threatening to withdraw the US from the 164- member World Trade Organisation to which China had become a member in December 2001.

Trump administration has been waging a war on the WTO’s Appellate Body and has continued to block nominees to the Geneva-based tribunal, which has rendered it unable to convene the required quorum.

What are medical reasons for not wearing a mask?

Disney+ Hotstar Is Now Finally Streaming In 4K On Your Android...

Man Who Plotted UP Bus “Hijack” Arrested After Encounter With Police